White as a Ghost

I have been worried about how pale Lucy is since her operation. She is doing fine and even went to play out in the sunshine in the garden a couple of days ago when Daddy put up the swing. However, she is still really pale and gaunt.
I always check on her in the night, shortly after she has gone to bed, then again when I go to bed, and often when I have to get up to visit the bathroom, or someone else wakes me up.
Last night it was her sister that woke me and asked me to tuck her back into bed. I walked into the room and it felt like my heart was in my throat. Lucy was lying on her back, mouth slightly open, white as a ghost and eyes half open. To be honest, she does sleep a lot like this..i.e. mouth and eyes a little open, but it was just a shock seeing her so pale as well. Of course, you can't see her breathing easily either because of the halo vest covering her chest. I did however notice a small fall and rise of her tummy.
I had to touch her, just to see, just to make sure.
It was such a relief to feel her warmth.
She stirred in her sleep and asked me to turn her over, so I helped her on her side and she promptly started snoring.
If only she had been snoring when I walked in the room.

Now it's Time to Recover

Lucy had her second operation yesterday morning. She went down to theatre about 11.30am and was asleep by 12, we went straight to her as she came out of theatre at 6.15p.m. Waiting for your child while in theatre is the most surreal experience, you go through a plethora of emotions. Then when they take longer to come back than you expected, we were told four hours, you start worrying, really worrying.

We were told that they were performing a fixation of the C1 and C2, this means two small screws in either side and a small titanium plate joining them up to keep them perfectly straight. This means that she won't be able to turn her neck as much as before. I'm sure she will cope, she hasn't been able to turn her neck for the last ten months anyway. We were also told that she might need a further plate on the occipital joint at the base of her skull which means that she wouldn't have been able to look up or down either. Again, she hasn't been able to look up or down for the past 10 months. However, once in there they decided that they wouldn't need the plate on the occipital joint. They were not happy with the C1 on the left side, the bone that had deteriorated, so they performed a bone graft from her skull and added it to the C1 to give it more strength.

We had been told that if they were happy with the fixation then she would not need the halo back on, however, because they had to do the bone graft she needs the halo back on until it fuses, so it will be around six to eight weeks before it comes off. Such a shame, we'd have liked to have been rid of it.

Lucy was back on the ward by 7 p.m. and she was really sleepy from the anaesthetic and the morphine. She had a drip for fluids and a catheter, so no need ot move or bother her, she just had to sleep it off. And sleep she did, all night and all day today. She did wake for short periods, but struggled to stay awake and went straight back to sleep. She woke in the night during obs. and wanted to be turned over. She became quite distressed so the nurse pushed her morphine button. She had morphine constantly pumped into her but she also had a button to give her a little extra if in pain.

She got a bit panicky when they came to take her blood. She has developed a real hatred of needles. Then she was distressed when taken for a CT scan but only because they had to move her from her bed to a trolly and back again. In between being moved she was ok. She says she is not in pain, but I think that proves that she is hurting.

Tomorrow, she should be more alert and we will need to move her, at least get her sitting up. She also has to have the halo vest altered because it's too high up.

Her stitches will be removed in ten days time.

Overall, it all went well. They didn't hit any problems other than her suffering a big loss of blood and having to have quite a hefty transfusion.

We have to hope now that it has all been worthwhile and her head stays upright. She will never be able to move her neck normally, but at least she will be safe, comfortable and hopefully pain free. 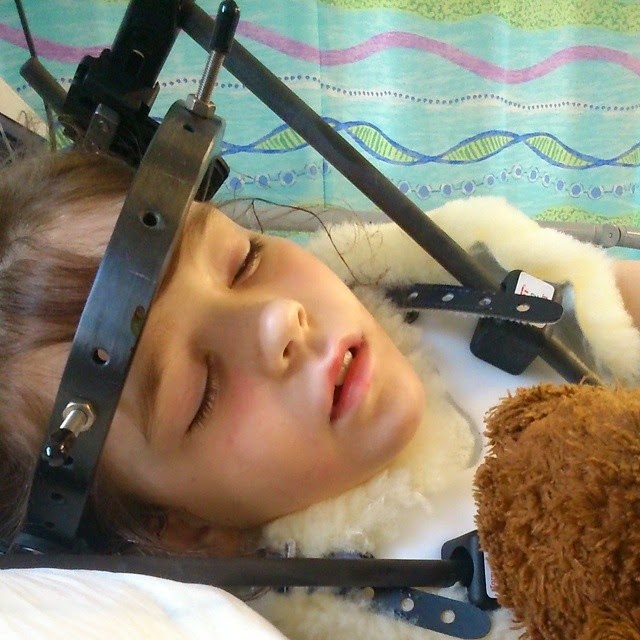 One Down, One to Go

The last three days have been a complete emotional roller coaster. First, Lucy's operations were moved to different dates, then they were postponed altogether, then yesterday afternoon we had a call saying it was all back on and could we bring her in immediately.

So we arrived on the ward and had a nice little cubicle, Bed no1. We had a fairly good night despite it being a very noisy ward. So many crying children, it's difficult to ignore them.

This morning Lucy was a little panicked. We had told her that she was having the halo back and she'd been ok with it. She was ok with it last time, she dealt with it much better than us! However, this morning she decided she didn't want it back and was distressed.

By the time we took her down to be anaethetised for theatre she was really upset. She screamed when given the canula, and gagged and sobbed as the anaesthetic was administered. It was very distressing.

The manipulation and halo application went really well and took nearly an hour shorter than last time. We could see why when she got back...four screws instead of eight? Also, her neck is not very straight. Still it's just a temporary measure until the next big operation.

On Wednesday she will go back to the theatre, hopefully she'll be keeping her canula in until then so no big needles. The will open her neck and attempt to screw her bones in place along with a metal plate. To create a better fusion they will also had some bone graft, taken from her thigh or her skull. She is going to be hurting afterwards for sure.

Once they have completed the fusion they will decide whether or not to keep the halo on for a while. She could be coming home in five to ten days after the operation depending on her recovery.

During the time leading up to operations you feel so anxious, so worried that something may go wrong and that you will be leaving the hospital without your child. You don't want to think that way, but you know it's a possibility and it hurts to even think about it. Then while your child is recovering on the ward another little patient loses their battle and your heart starts pounding and the pain feels so real even though you know it's not your child. Then shortly afterwards, yet another patient loses their battle. And you cry, you don't even know these children, but you know it could so easily have been your child and you feel the pain of the parents an family, you feel their loss.

Having a sick child is so emotionally draining.

I can't really explain how I'm really feeling right now. I was talking with Lucy's dad last night and we both feel the same. The main feeling is fear, we are both really scared that something is going to go wrong, we can't even mention the worst case scenario...over-reacting...maybe, but always a possibility. We are worried about how she will cope with it all next week, it's definitely going to be one of the worst weeks of her life and we don't want to see her suffer. We are worried that it may not work and all her suffering will be for nothing. Another over-reaction? Can you blame us, we thought the physio therapy would work but it didn't, we thought the manipulation would work but it didn't, we thought the halo would work, but it didn't, of course we are not going to have complete faith.

There are so many things that can go wrong. There is no promise of a full and complete recovery, she won't be able to move her neck very much at all afterwards. There is no way we can't go through with it, it's not just the twisting of her neck, or the pain, she can cope with that. It is getting worse and we can't allow that, the more it slips the closer it becomes to being fatal. Quite simply, if she doesn't get it fixed she could die.

I have to leave things in order at home so the older two can look after themselves, so a weekend shop is in order and I'll have to make sure all the laundry is sorted.

So it's going to be a tense week coming up. Please keep Lucy in your thoughts and hopefully I'll be bringing her smiling face back home again as soon as possible.