1 Year Since the First Halo

This time last year Lucy was in hospital waiting to have her manipulation and halo fitted. We had no idea what to expect and neither did she. I really didn't think that they would go  ahead with it, the pictures I'd seen looked barbaric and I couldn't imagine my little girl like that.

Then we went to pick her up from theatre and this is what greeted us. 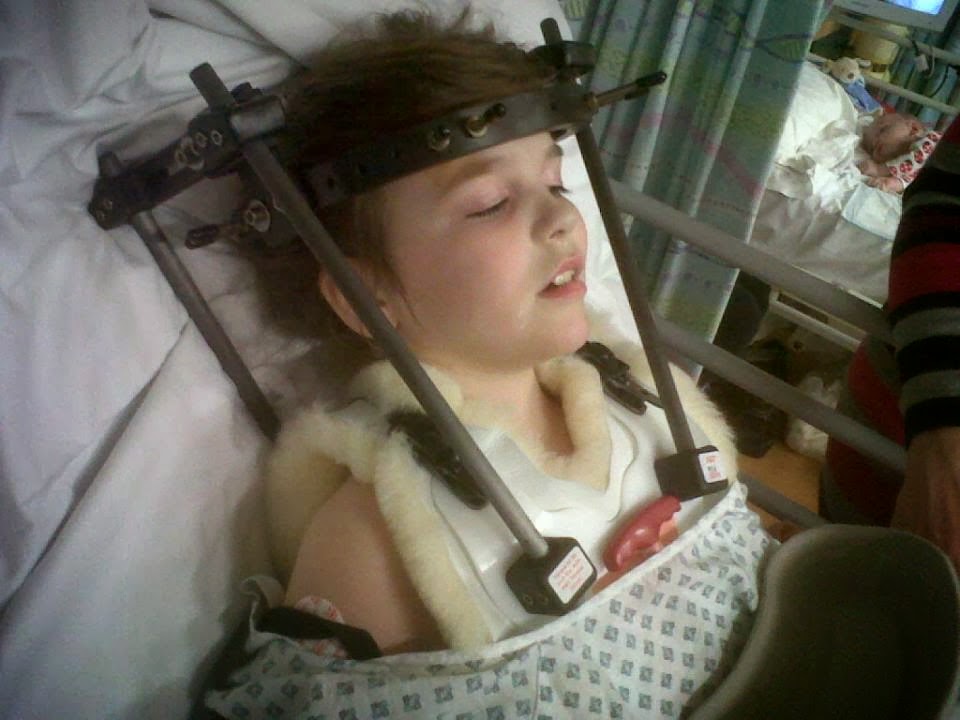 We were horrified, none more so that Lucy herself who immediately tried to pull it off. It was most distressing. We did get used to it though. In just  few days she was up and moving around, and five days later she went home from hospital. She was in the halo for 14 weeks in total and we did get used to it. We had no choice really.

I started this blog because having to face this was such a big thing I thought it would be nice to share our experiences and let others know that it can be done, it's not all bad. Of course it would have been nice if it had worked, but sadly as soon as it was removed, Lucy's neck bent again. That was heartbreaking.

We didn't give up though, we couldn't really. Just three months after having it removed Lucy was back having it put on again. This time though she'd been fixed with a plate, screws and bone graft. The second time the halo was on for only six weeks and Lucy took it in her stride. This time it worked and now my little girl is fixed. She only has 50 percent movement in her neck but she copes great.

We are taking a break for now but will soon be chasing up our appointment with the rheumatologist. We want to know why this happened and if similar injuries can be prevented in the future.

We also need to sort out her knee problems, although I'm not hopeful as it's something she's suffered with since birth and has had no help with so far.

Finally, I need to sort out a special needs statement before she heads on up to secondary school. I really don't think she will manage otherwise.

My little zebra has a long journey ahead of her.


Today, after being off sick for eleven months, Lucy went back to school.

She's now in year five. She only spent eight weeks in year four. She was already poorly with her neck when she started, her problems had started at the beginning of the summer holidays and she'd already had one spell in hospital and was visiting weekly for physio therapy.

Then early December 2013 she went into hospital again for a manipulation and was first fitted with the dreaded halo.

She was provided with a home tutor, who has been lovely, and has kept up with the same work her former classmates were doing.

The halo was removed in March, but it hadn't worked.

In June Lucy was given surgery and her neck is now held together with metal plates and pins, and a bone graft. Again, the halo returned.

Just before her birthday in August the halo was removed again and we had our little girl back. She can now hold up her head by herself, although she has lost fifty percent of movement in it.

After talking with the school we came up with a plan to ease her back in gently, so she's going three mornings this week and if that goes ok she'll do five mornings next week. When she is ready she will go back full time.

This morning was very emotional. She was really scared and cried so much. None of my children have ever cried to go to school, even when they first started, so it was also really difficult for me. She still went though. We met a little girl who remembered her in the playground and then her teacher and everyone was really nice. When I picked her up just before lunch she was a lot happier.

I am so very very proud of my little girl. She didn't have to go back, she could have stayed with her home tutor until next year at least. She was very brave. She has always been brave. She's a true Star!